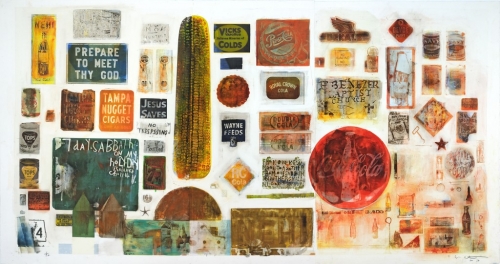 This is not really an art review; this is a reverence, an adoration.  William Christenberry’s work hit me hard when I first saw it around 30 years ago.  He is now a major American artist with an international reputation and a long record of important exhibitions.  When I met him in his Connecticut Ave studio many years ago and saw him at exhibitions of his fellow DC artists, I valued his unique appreciation for personal history.  He caught the eye of other photographers such as Walker Evens and often worked with the great William Eggleston. He was spurred on by the extraordinary curator, Walter Hopps.  With what appeared to be lightening speed, Christenberry became a national figure with many museum shows.  His early photographs using a simple Brownie camera and his small constructions of churches and rusted scraps of advertising signs were so personal and original that I remember them in detail.

The Hemphill exhibition is relatively small especially since Chistenberry’s body of work is so extensive, but it reflects the essence of his work.  I hope that it leads viewers to seek out more of his work not only of signs, old stores, and churches, but also of the heart-breaking images of children’s graves decorated with toys.  His work is rooted in past and present Alabama.  His images tell stories and are remarkable for the light they capture.  Some artists are known for their moods.  Christenberry is known for his intelligence, his special understanding of simple objects, and most of all, for his love of his subjects.  He understands as few do, that objects hold history.

Even though his Klu Klux Klan dolls are not shown in this exhibit, I must mention them.  He used to keep them in a special room lit with red light.  They resemble the Voodoo dolls of Haiti, New Orleans, and some other cultures.  I remember they conveyed real menace.  It was clear that the Klan signified danger, not only for the newly freed slaves of the South, but also for contemporary African American and white Southerners.

I am grateful to see these works again.  I would like to join Hemphill Fine Arts in recommending William Christenberry, the Aperture monograph (2010).