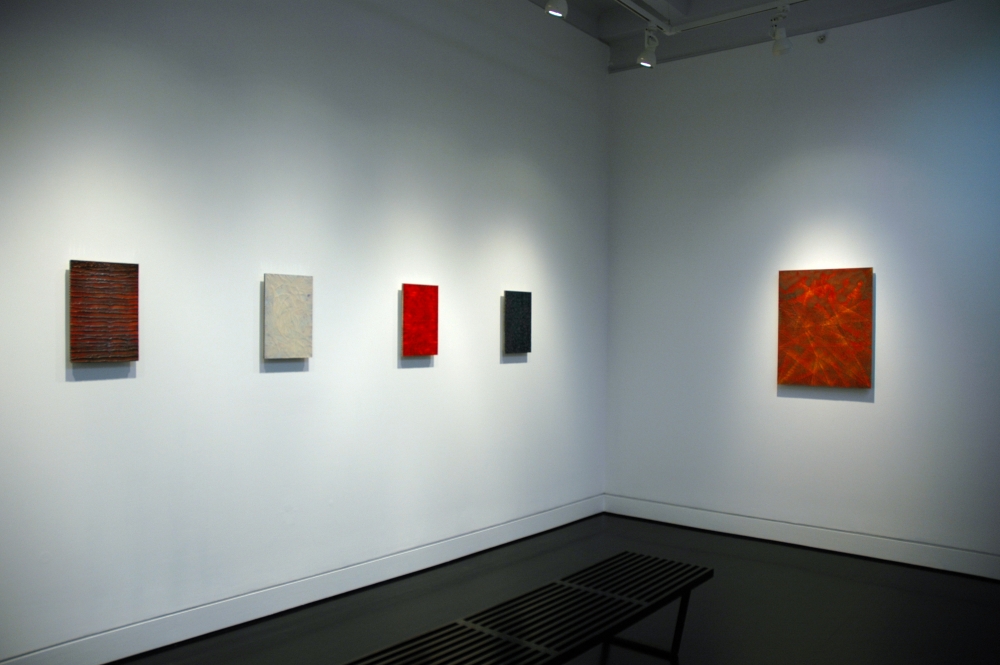 Robin Rose is something of a Washington art institution. Known for lushly textured paintings in encaustic, or wax, and with work in the collection of the Corcoran Gallery of Art and other museums, the 62-year-old can be relied on to emerge from the studio every year or two with another body of work, typically grouped under a cryptic, single-word headline: "Evidence," "Likeness" or, as with his current show at Hemphill Fine Arts, "Endeavor."

The eight works you'll find at Hemphill are classic Rose. Deeply indebted to the Washington Color School for their subtle interplay of hues, the paintings are pure abstractions. They're not pictures of anything. Yet they do, from time to time, call to mind the real world, as with the artist's oh-so-cherry-blossomy "Flora," which resembles nothing so much as a slightly sodden puddle of pink petals. Lovely stuff, if not for every taste. To some, Rose's paintings can look too much like -- I don't know -- decor.

So it would be only natural to assume that "Robin Rose: Cypher," a second show on view at the American University Museum, is more of the same. But you'd be dead wrong. In an abrupt departure from the style on which he has built a successful career, Rose has decided to show, for the first time, a series of found-object sculptures.

It's about time, too.

That's not a complaint. I mean that literally. The subject of the show is time.

There's a bit of the old Robin Rose here and there. A few encaustic paintings (one of which serves as the base for a pair of bronze baby shoes). Some beeswax slathered, like cake frosting, onto the deck of a skateboard, or gooped over the tiny branches of a bonsai tree. Two wax candles in the shape of human heads. But for the most part, this art doesn't have anything to do with wax. The direction he's going in is new.

It's the stuff itself that isn't.

Over here, there's an Italian Vespa scooter, its "buddy" seat piled high with tarnished heirloom silver. On one wall hangs a bunch of vintage rock-and-roll effects pedals, meant to lend reverb, fuzz or other forms of distortion to electric guitar. Their naughty brand names (Swollen Pickle, Big Muff) are more than a little sophomoric. Over there, a turntable -- a turntable, for God's sake! -- spins eternally, its tone arm bumping soundlessly against the label of the seminal Miles Davis album "Birth of the Cool." A set of bookshelves holds such archaic board games as Concentration and Kreskin's ESP. It's like a museum of mid-20th-century modernist design. Or a yard sale whose proprietor has disappeared into the house for a second to make change.

But it's a lot more than just some old junk.

If there's an overriding flavor to "Cypher" -- a meaning, if you have to get all literal -- it's one of lost youth and innocence. Of growing not just up, but also old.

The title Rose has given to that piece with the Vespa says it all: "Responsibility." It's a young man's ride, carrying, in essence, the old man he will become.

That feeling is everywhere. It's in a piece called "Expiring," which features a houseplant sitting on a digital scale. Next to it is a clipboard logging its weight loss. April 2: 60.0 pounds. April 6: 57.8 pounds. When I saw it, it was down to 54.0. It's disappearing before our very eyes.

It's in the bronze baby shoes, and the pile of old board games, too. And it's in that Miles Davis record. "Cool" might have been born in 1957 (the year the album came out), but in 2009, it just looks . . . antique. Modernism isn't so modern anymore, and classic rock is just another name for oldies.

Art is a little bit like that, too. How long can someone keep doing the same thing, playing the same record, over and over? Rose seems to know that. "Cypher" is sly proof that you can teach an old dog new -- and, in this case, fascinating -- tricks.