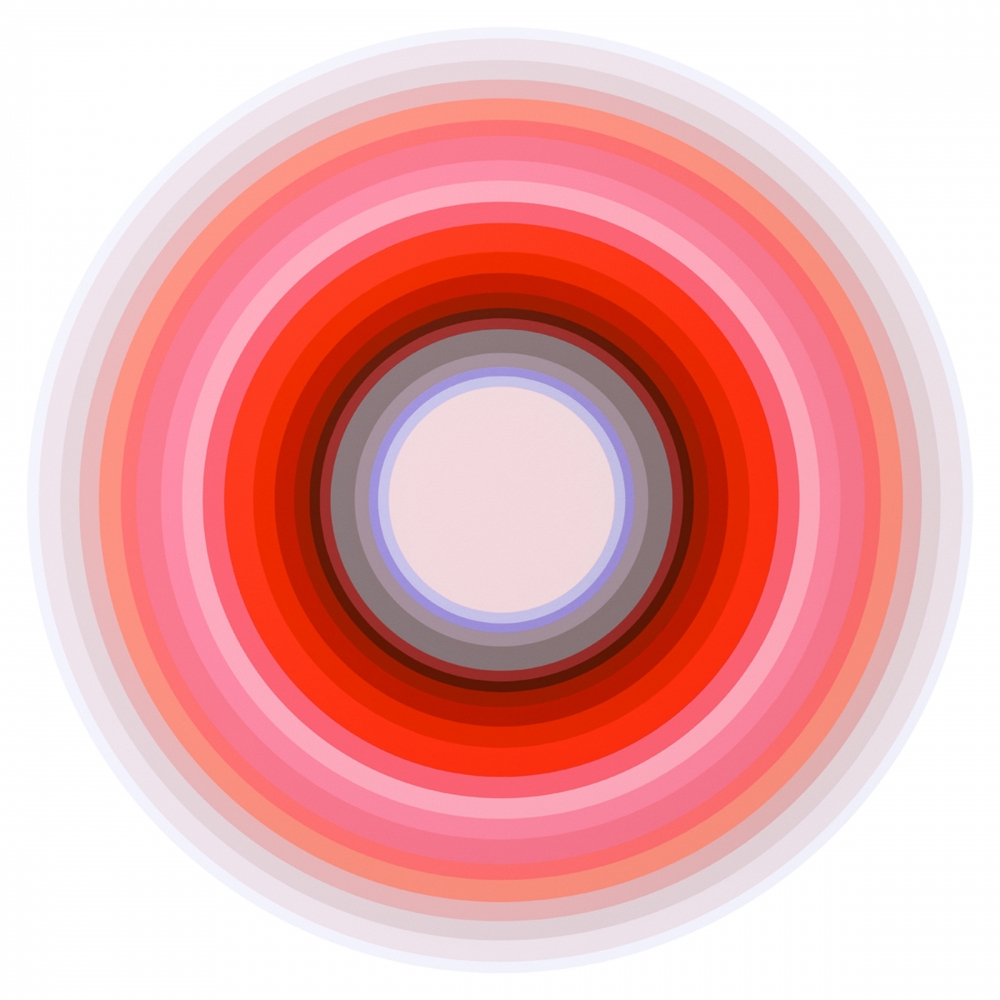 The concentric-circle paintings that Kenneth Noland and Jasper Johns began making in the 1950s were often called “targets.” Linling Lu, their successor as a maestro of orbiting bands of color, has a more elaborate term. She calls her ongoing series of minimalist yet exuberant pictures “One Hundred Melodies of Solitude.”

“Music has always been an inspiration for me,” Lu explains in an email. (The China-bred Baltimore artist responded to questions about her work in writing in part because English is not her native language.) “Colors are like individual instruments. I listen to their voices, the ways they sing, and the power they generate in different settings.”

“Linling Lu” is on display at Hemphill Fine Arts, a gallery that often shows art by Washington colorists in the spirit of Noland and his D.C. colleague, Morris Louis. The kinship between Lu and Noland is clear. (The link to Johns is weaker.) But Lu’s works differ from their 1950s predecessors in significant ways.

Noland’s paintings arrayed circular forms on rectangular fields. Lu fashions her canvasses so that they’re the same shape as the bands painted on them. They’re all-circle, so that they fuse form and content, and verge on the sculptural. (Later in his career, Noland also made shaped canvasses.)

Noland stained diluted pigment into the canvas, so its watery nature was visible, as was the fabric’s weave. Lu’s clean, bright colors appear inviolate, without variation in tone or texture. There’s no sign of pencil strokes, tape marks or brushstrokes. She doesn’t employ spray paint, but the surfaces she crafts are so immaculate that they recall California’s 1960s “finish fetish” movement, influenced by the fiberglass skins of sports cars and surfboards.

Lu’s models are more traditional. In addition to classical piano, which she began studying at age 4, she traces “Melodies” to her courses in mathematics, especially geometry. Equally important are her childhood memories of brilliant sunsets and her study of landscape architecture, in which she received a degree from Beijing Forest University before turning to painting at the Maryland Institute College of Art.

“In many traditional Chinese gardens, circle-shaped doors and gateways, which are also called moon gates, are designed to lead viewers into an undiscovered, mysterious, and endless realm,” she writes. “The circle gates also function as shaped frames where architectural forms and components of nature join in play.”

“Mysterious” and “endless” are words that suit Lu’s pictures, which seem to offer an infinite variety of colors, widths and arrangements. “One Hundred Melodies of Solitude No. 115” is sun-like, with yellow and orange bands around a deep red core. “No. 122” is more moonlike, with a large expanse of indigo surrounded by thin loops of lighter blues. The undulating green rings of “No. 120” could be a field or a forest, blurry in the distance.

Not all of Lu’s “Melodies” are so narrowly color coordinated, however. The contrasts between hues and band widths can be considerably wilder, and shift as ­dramatically as in “No. 111.” There, yellow frames a gaggle of pinks around a grassy core enclosed by a medium-green border. Other circles are punctuated by unexpected touches, whether the white pith of “No. 112” or the lone thin dark band in “No. 118.”

Also included in this show are small, painted-wooden-block sculptures in which the paintings’ impeccable flatness expands to three dimensions. These employ colors previously used in circle pictures, but without their unifying design motif. Cut into an assortment of right-angled shapes and arranged variously, the constructions evoke architecture rather than nature.

When their colors pulse in the manner of op art, Lu’s paintings evoke motion and stillness at the same time. But the latter quality is more important to the artist, who sees her art as a means to realize Taoist and Buddhist ideals of compassion, contemplation and solitude. Her work is personal, yet meant to transcend personality.

While gazing into the calm vortex of any of the “One Hundred Melodies of Solitude,” the observer might merge, however briefly, into a larger whole. Her goal, Lu writes, is that viewers “see themselves in the art, like looking in a mirror, instead of seeing me.”