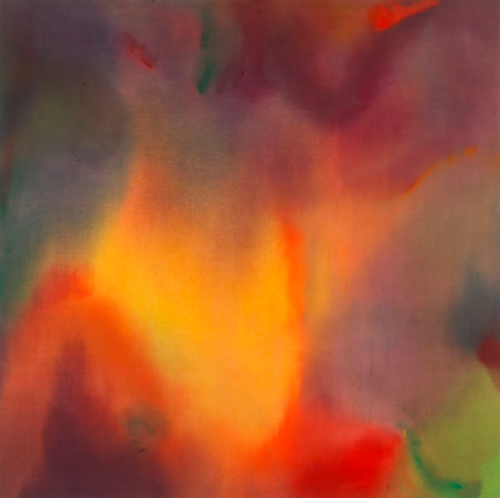 The last years of the 1960s were pretty eventful for Willem de Looper, to judge from “Stained Paintings, 1964-1970.” The Hemphill Fine Arts show starts with two tentative works from 1964: The Dutch-bred D.C. painter (and onetime Phillips Collection curator) sketched acrylic pigment on the raw canvas for which Washington Color School innovators Morris Louis and Kenneth Noland were known. By 1967, de Looper was filling the frame, at least in the works on paper included here. But he did so with discrete forms whose arrangements didn’t quite harmonize.

It’s only in the last three years of the period that de Looper’s work began to flow, whether in the deep wine colors of 1968’s “Untitled I” or the oceanic blues and greens of 1969’s “Oxford.” Open space vanished, and the canvas was washed with soft, immersive color. Instead of employing the distinct stripes, chevrons or rivulets of his predecessors, the painter blended hues like an old master.

The gallery’s notes on the show stress that de Looper — unlike Louis and, later, Sam Gilliam — did not paint on unstretched canvas. That may explain why de Looper’s style appears more illusionistic, with a sense of depth and colors that seem to billow. Another distinction is a subtler, perhaps playful touch: On such pictures as “Sam” and “Ten Years,” the artist spattered droplets of contrasting hues. While the dribs are barely visible, they defy the era’s briefly influential gospel of flatness. De Looper was to take other paths before his death in 2009, but he came into his own in the years covered by this show, somewhere between those unsure 1964 works and 1970’s rich, aptly titled “Intense Green.”