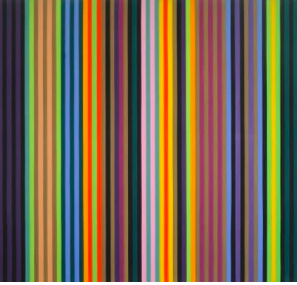 The Washington Color School might also be called the Washington Raw Canvas School. Beginning in the late 1950s, such local painters as Morris Louis and Kenneth Noland used untreated canvas, both for the way that diluted acrylic pigment seeped into it and as a neutral ground to set off the strong hues. So it’s intriguing that the large Thomas Downing picture that greets visitors to “Selections from the Dolly Langdon and Aldus H. Chapin Collection” at Hemphill Fine Arts is the only one that employs unpainted canvas.

Made between 1958 and 1986, these 19 works constitute an impressive sampler of Washington color painting, although they include one by an artist who never lived in the District, Karl Stanley Benjamin, and one by a representational artist, Michael Clark (whose “Lincoln Memorial” features bars of luminous color). There’s nothing by Louis, but there is Noland’s cool-toned “Target” and pieces by most of the other expected artists.

While the stylistic range is not vast, the variations are significant. Downing’s “Grid 1 Series, April 21, 1971,” which arranges colored dots neatly on that off-white field, is one of several pieces with hard-edged shapes. Others, including Howard Mehring’s “Nascence,” appear watery. So does Sam Gilliam’s “Mess of Greens,” whose narrow palette and soft stripes contrast with the sharp lines and dark-versus-light schema of Gene Davis’s “Black Rainbow.” Anne Truitt, who’s known for painted sculpture, gives “Spies” an illusion of depth by hinting at a horizon line at the bottom. Leon Berkowitz does something similar, albeit more romantically, with the luminous “Study for Sea Forth.” And Ed McGowin riffs on Noland’s targets with the Plexiglas semicircles of “Vacuum #2 and #7.” These works, most of them now for sale, must have lived well together. Certainly they have a lot to say to each other.