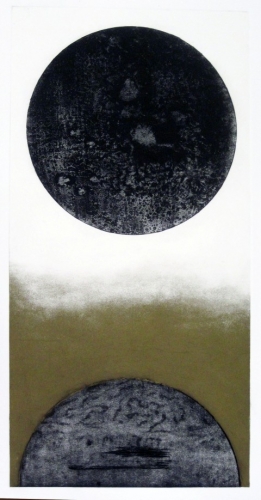 China-bred local artist Linling Lu also invokes the Tao, more earnestly than Wiley, in “Lilac,” her exhibition of paintings and fabric works at Hemphill Fine Arts. The selection includes some of her previously seen “One Hundred Melodies of Solitude” from 2010, which consist of brightly hued circular bands and color fields on round canvases. The paintings, which often feature large expanses of pulsing color at their centers, suggest the Taoist idea of chi, the body’s internal energy.

That life force is more muted in her 2012 “Melodies,” which use the same circular format, but often with cooler colors. Interestingly, Lu has arranged several of the earlier paintings with more recent ones, hanging them on the walls as if they’re gears in some kind of machinery. A few of the pictures stand alone, but most are part of multi-ring installations. (They can be purchased separately.)

However the paintings are organized, their most impressive aspects are their purity and precision. Lu’s predecessors include such Washington Color School artists as Morris Louis and Kenneth Noland, but she doesn’t share their taste for letting the process show. Lu’s canvases are impeccably crafted, with no visible glitches and a stunning sense of unity. They appear perfect and eternal, as if they’d always existed. Such canvases can’t help but upstage the artist’s recent fabric works, which assemble scraps of found textiles from China, India and the United States into triangle or diamond shapes.