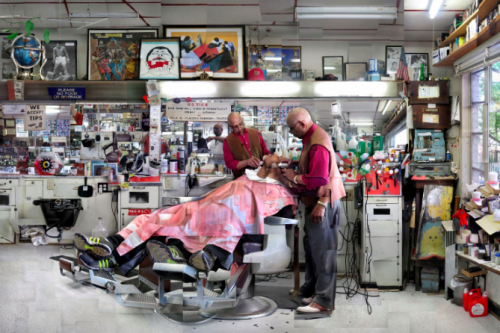 Gallery summer group shows may have roughly the same motivation — filling the space during a slow season for sales — but they take many forms. Some revisit earlier exhibitions, while others feature work that’s new or just didn’t fit into previous lineups. Overarching themes are not required but can be ambitious. Thus, Hemphill Fine Arts’ “Artist-Citizen, Washington DC,” in which eight artists and two collectives enter the civic realm.

That realm is broadly defined. Local folk artist Mingering Mike drew child-like portraits of the members of the D.C. Council, while Max Hirshfeld made glossy portraits of area arts-world dignitaries (or at least they look like dignitaries in these somber photographs). James Huckenpahler executed a series of prints of simple gray shapes, including “Carl Rowan’s Butt” — a reference, surely, to the butt of the unregistered gun the journalist used to wound a teenage trespasser in 1988.

Workingman Collective undertook a hand-shaking (and fist-bumping) tour of the city, video-recording the process in front of such landmarks as Ellington School, Eastern Market and the MLK Library. The excursion has been edited to a highlight reel that runs a mere eight hours. Even more collectively, free[space]collective has assembled — and is still assembling — a crowd­sourced, D.C.-shaped grid of snapshots, with new ones hung atop earlier ones on the section of the map that corresponds to the photo’s location. Franz Jantzen also photographed multiple ­images, but all of one place: the D.C. Barber Center, shown in a kaleidoscopic collage of some 400 frames.

Julie Wolfe returns to one of the themes of her recent Hemphill show with “Local Source — H2O,” a set of local water samples that’s a dystopian sci-fi thriller in everyday glass containers. And Anne Rowland revisits her childhood neighborhood with an outraged, hilarious critique of the mega-neo-mansions recently built in McLean and Great Falls. If the personal is political, these grandiose, dysfunctional structures are calling artist-citizens to take to the streets (or, more likely, cul-de-sacs).