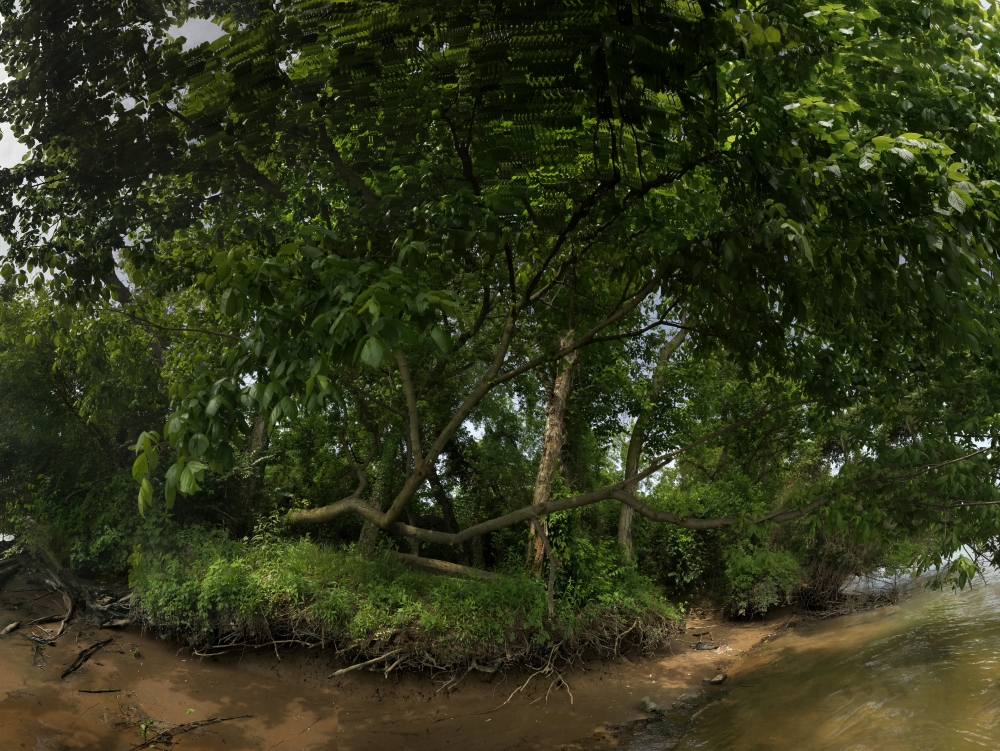 Arlington might not be quite as photogenic as the city across the Potomac, but two of the area’s best art photographers have made striking vistas of the county’s suburban landscape. Frank Hallam Day and Anne Rowland will discuss their Arlington-commissioned projects Tuesday at 6 p.m. in the lobby of Courthouse Plaza, where some of the photos will be displayed.

Both artists’ photos have been visible for a while, if not in the most accessible places. Five of Day’s ghostly nighttime views of Rosslyn are permanently installed in Courthouse Plaza’s first-floor conference rooms, and Rowland’s 15-photo tour of Arlington’s Potomac shoreline is partway through a year-long trip on one of the rolling galleries dubbed “Art on the ART Bus.” (The Arlington Transit vehicle will stop in front of the building for a peek Tuesday at 6:39 and 7:49 p.m.)

It’s fitting that Rowland’s pictures have been in motion since July, because they began on a boat. The photographer took to the Potomac in the spring, shooting the waterfront with an iPhone and a point-and-shoot camera attached to a 20-foot bamboo pole. (This means the pictures hail from the District, because the river itself is not in Virginia.) The finished panoramas were “constructed” — that’s Rowland’s term — from multiple frames with photo-editing software.

Rowland is not a documentary photographer, and she acknowledges the influence of Romantic-period painting on her style. Her Potomac pictures don’t entirely exclude the modern: Airplanes fly overhead, and graffiti garnishes a bridge. But anyone who encounters the photos on the ART bus will find a pastoral vision quite unlike what they can see out the window.

Day makes pictures that imbue the everyday with vivid strangeness. This is true of both his Rosslyn photos and his current Addison/Ripley Fine Art show, “Please Pay Here.” His recent work promises a more casual approach. Day no longer uses “big serious gear,” he writes, and most of these prints are smaller than his usual ones. But they’re still eerie, with a film-noir vibe that comes from shooting after dark and through streaky glass, scratched plastic or various sorts of water vapor.

A world traveler, Day often focuses on humid, neon-smeared Asian scenes. This selection includes glances at Bali, Bangkok and Singapore, but also Berlin, Sudan and New York. Multiple layers and surfaces are typical of the pictures, which gaze through as well as at. Some benefit from exotic locations, but Day can find the uncanny in things as commonplace as an elevator button, glowing red as though beckoning to another dimension.